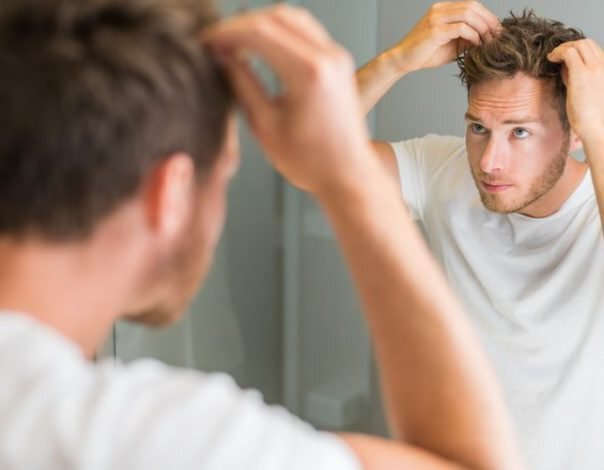 The sooner you can positively determine that you're losing your hair, the more hair you will likely be able to save. Here are the signs you need to look out for, and an overview of common hair loss treatments.

By most estimates approximately 40% of American men start losing their hair before they've reached their 40th birthday, while the stats for older guys are even less encouraging.

As Dr. Landon S. Pryor, a respected board-certified plastic surgeon based in Rockford, Illinois, points out, “About two thirds of men experience some thinning by age 35, but by the time they reach 50, 85% of them will have significant hair loss.”

Only one generation ago, there wasn't much you could do once your hair started to thin. You could either go out and get a wig or expensive hair weave treatment, or wait as long as you could possibly stand witnessing your relentlessly balding dome in the mirror every morning before finally undergoing hair transplant surgery. You had very few, if any, realistic options to be pro-active about your condition.

Fortunately, in recent years notable strides have been made towards eradicating the scourge of male pattern baldness (MPB). As such, millenials will probably emerge as the hairiest generation in human history.

That said, there's still no “cure” for MPB. However, there are things you can do that might slow the process down and sometimes even stop it altogether. Just remember, retaining your hair when you have MPB requires a certain amount of vigilance.

In order to preserve your locks, you need to keep your eyes open for any early indications that male pattern baldness might be creeping into your life. Because by the time it's become obvious and you're finding clumps of hair on your pillow, in your comb, and clogging up the shower drain, you're already somewhat behind the 8-ball.

Put simply, the sooner you can positively determine you're losing your hair, the more hair you will likely be able to save. Because once your hair has fallen out, it's never coming back again — not naturally, at least.

There are few ways to accurately determine if your hair loss is the result of male pattern baldness and not some  temporary factor  causing it to fall out. This is what you need to watch for.

Almost all guys with MPB start to lose their hair in the same manner. For most men, as their hair loss progresses, the frontal hairline starts forming into an ‘M' shape as hair recedes from their foreheads. This is because the hairs on the temple and crown are the most sensitive to dihydrotestosterone (DHT), which is the primary chemical culprit behind male pattern baldness.

With time the middle of this ‘M' recedes ever further, resulting in more of a ‘U' (or horseshoe) shape towards the back of the head. Left untreated, the hair will continue to retreat until the scalp is partially or completely bald.

For some guys the crown of their scalps are also susceptible to early hair loss, and as such they can start balding in that area before it becomes apparent at the frontal hairline.

To check for this yourself, just stand in front of one mirror while holding another mirror behind your head, the same way your barber or hairdresser might when showing you the results of a haircut they've given you. Similarly, you could ask a friend, family member, or your partner to take a few photos of the top of your head, maybe offering their own prognosis on the state of your dome while they're at it.

To accurately gauge if your hairline is receding, all you really need to do is photograph yourself every couple of months. It's that simple. The only trick is to make sure you always do so under the same lighting conditions so there will be no room for ambiguity should you detect any subtle changes as the months go by.

Also, pay attention to any errant hairs you might come across — especially if you're finding them with any degree of regularity. Check your pillow, your comb, hairbrush, the headrest of your car if you drive, your coat lapel; a certain amount of errant hair is perfectly normal, but if you start finding more of them as time goes on, approximately 15 or 20 hairs at a time, you may well be experiencing the first stages of male pattern baldness.

One final thing to consider is: does anyone in your family have a hair loss problem? If they do, while there's certainly no guarantee you will develop one too, it does become more likely and you need to keep this in mind.

By the same token, scientists still don't know for sure how baldness is inherited, so if you have a bald father, grandfather, brother or uncle, it's definitely not a given you will suffer the same fate, however, anecdotally, at least, you are at greater risk.

“Genetics is complex and complicated,” notes Pryor. “The primary balding gene is on the X chromosome coming from your mother, but some research suggests that men who have bald fathers are more likely to be bald as well.”

Everybody sheds approximately 100 hairs on a daily basis, which is completely normal. Actual hair loss, while also perfectly natural for a huge portion of the male population, is another thing altogether. However, not all hair loss is the result of male pattern baldness nor is it necessarily permanent. Other factors that can cause hair loss for any gender include:

While often mistakenly considered a problem primarily affecting the male population, by the time they reach their 50s and 60s, women are almost as likely as men to see their hair thin, and in some cases, even fall out completely.

In fact, according to the American Academy of Dermatology, 40% of women have visible hair loss by age 40, while the North American Menopause Society and other official bodies report almost half of all women will experience hair loss or thinning before age 50 – with the situation often worsening during menopause.

The Norwood (or Norwood Hamilton) scale is what professionals use to measure the extent of male pattern baldness, and considered the accepted standard when describing hair loss in general. As Dr. Pryor says, “the Norwood Scale is the most commonly used classification scale for MPB. We regularly use it when consulting with patients.”

Following this scale, there are seven stages of balding, ranging from no balding whatsoever to completely bald. The further along the Norwood scale you are, the fewer options you have to retain what's left of your hair.

By the time you get to Stage 5, you might as well forget about stop gap measures like Minoxidil or Finasteride treatments. At that point you're essentially looking at a transplant.

The stages of the Norwood Hamilton scale are as follows:

No hair loss at all or a very minor recession of the hairline.

A slight recession of the frontal hairline. For most, but not all men, their hair loss is barely noticeable at this stage.

At this stage there's no denying you are losing your hair. The frontal hairline has recessions around the temples that may or may not be covered by a thin layer of hair. Some men also start to see thinning or balding around the crown as well.

By this point, the recession at the temples has worsened, connecting to form a bridge of hairlessness between them. The front hairline might also have receded far back enough by stage 4 to connect with the now bald crown. A band of hair extending across the top separates the hair loss between the front temporal area and the crown, creating a bridge between the hair-covered areas on the side of the head.

By stage 4 it is fully evident you are balding. It's also when the majority of men start searching for solutions to the problem.

By stage 5 the hair loss is considered severe. The hair remaining hair on the scalp becomes thin and continues to recede on all sides.

The hair loss has continued to the point where there is far more visible skin than hair everywhere on the scalp.

Very little, if any, hair remains by stage 7. Should there be any surviving hair, it is typically found at the very back of the head.

If you've determined you have MPB and want to fight it, or just want to have your suspicions about going bald or not confirmed or verified, the specific medical doctor to visit is a board-certified dermatologist.